Sylvie Giner, who has taken part in many twinning exchanges between our two towns and is a long-standing member of the Montbazon/Brentwood Twinning Committee, is the new Mayor of Montbazon.

As leader of the winning group in the Council elections, she was elected Mayor for the period 2020 to 2026 on 23rd May.   This is an important full-time post – she is, in effect, the Chief Executive of the town.

She, and the Deputy Mayor, Nancy Texier, lead a group of 8 “Maires-Adjoints”, almost deputy mayors or cabinet holder in our system, who each head up various committees.   Our good friend Eric Rival, President of the Montbazon/Brentwood Twinning Committee, is one of these.

Congratulations to them all!

The Montbazon/Brentwood Twinning Committee had a colourful stand at the “Village Associatif” in Montbazon on 6th September.

Such an event takes place in most French towns and villages at the beginning of September each year, where all the local clubs and associations introduce themselves to residents and seek new members.   It was obviously successful for the Twinning Committee, as they recruited 4 new members to the Committee and 10 participants to their English Conversation classes.

Our chairman thinks that this is such a good idea and could be introduced in Brentwood.

December 2019
The Town Hall (Hotel de Ville) in Montbazon.  The Christmas lights are now on! 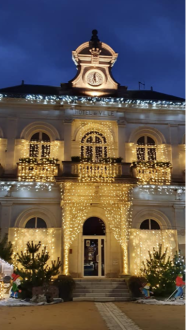 Montbazon lies some 230km south of Paris and 10km south of the city Tours in the valley of the River Indre, just south of the Loire Valley and is a small picturesque town that was home to the writer Balzac.

Montbazon is the main centre of a district of 19,500 inhabitants, comprising five communities in the valley and two on the plateau. It has the Chateau d’Artigny, built at the turn of the century as family home for the Coty family and now one of Frances finest hotels and is where the exclusive perfume Kenzo is made.